Candy Japan sends sweets from Japan to subscribers around the world on a twice-monthly basis. I've been running it as a kind of business experiment and openly blogging about all aspects of it.

In this post I'll do a behind-the-scenes cost breakdown inspired by the CushionApp expense report. As we are dealing with physical items here for Candy Japan it's a bit more complicated.

But I'll start with the software part of it. 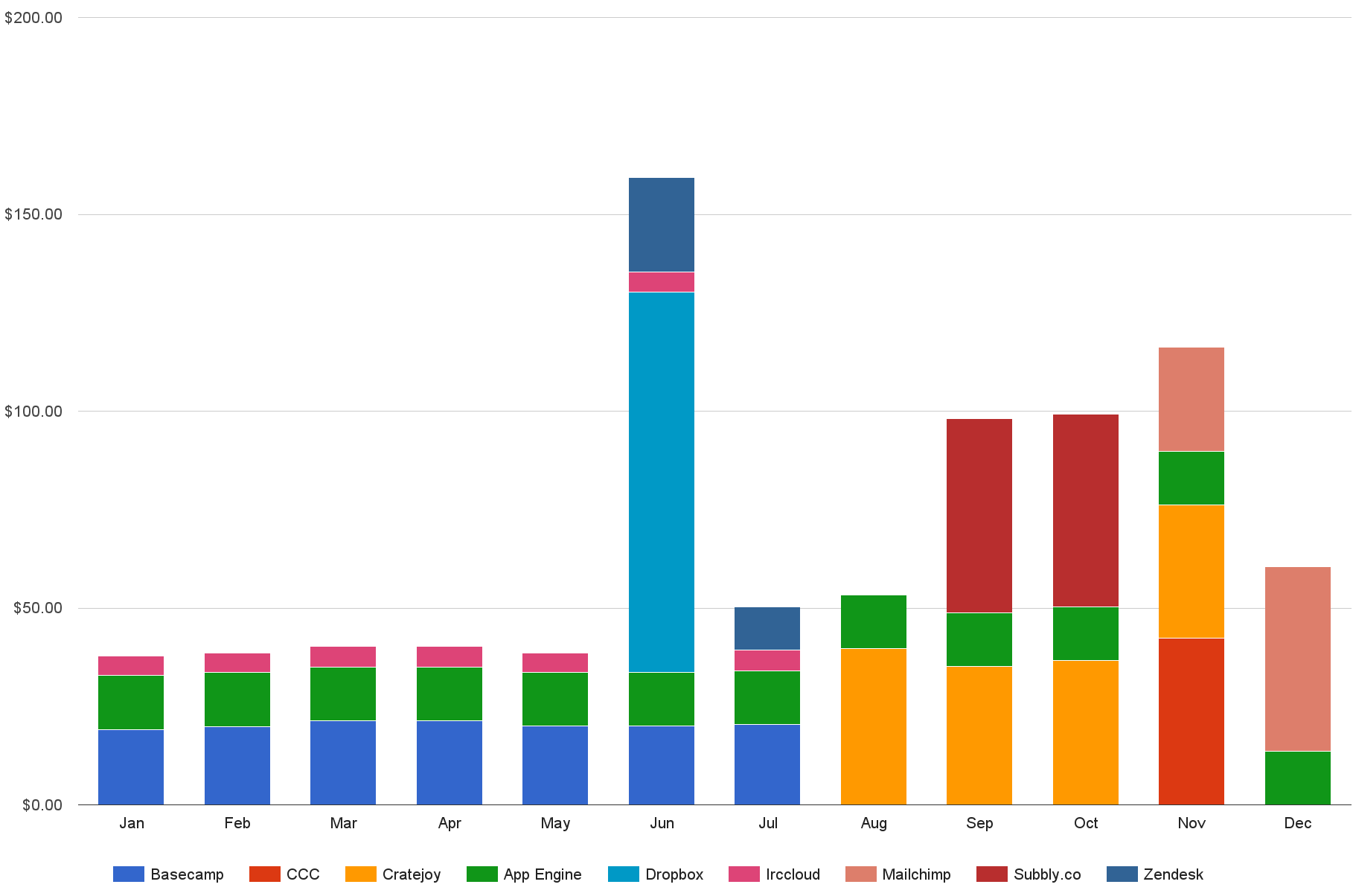 I was paying $20/month for the project-management tool Basecamp, until realizing how silly it is to pay for something that was basically just my own personal todo list. I replaced it with a text file, but will likely continue using it if later on I actually have a team to communicate with.

I stopped living dangerously and started taking proper backups of the site and codebase with Time Machine, Dropbox and additionally Carbon Copy Cloner (~$40 one-time payment). The cool thing about CCC is that it takes backups incrementally, while still allowing you to boot off the external disk. That way you should be up and running quickly if your original drive fails.

When I started there were no easy-to-use subscription platforms available. Nowadays there are a few, so to see what they had to offer I signed up and kicked the tires of CrateJoy (YC S13) and Subbly.co for a few months. They are priced based on subscriber numbers. Here's a comparison chart from my book: 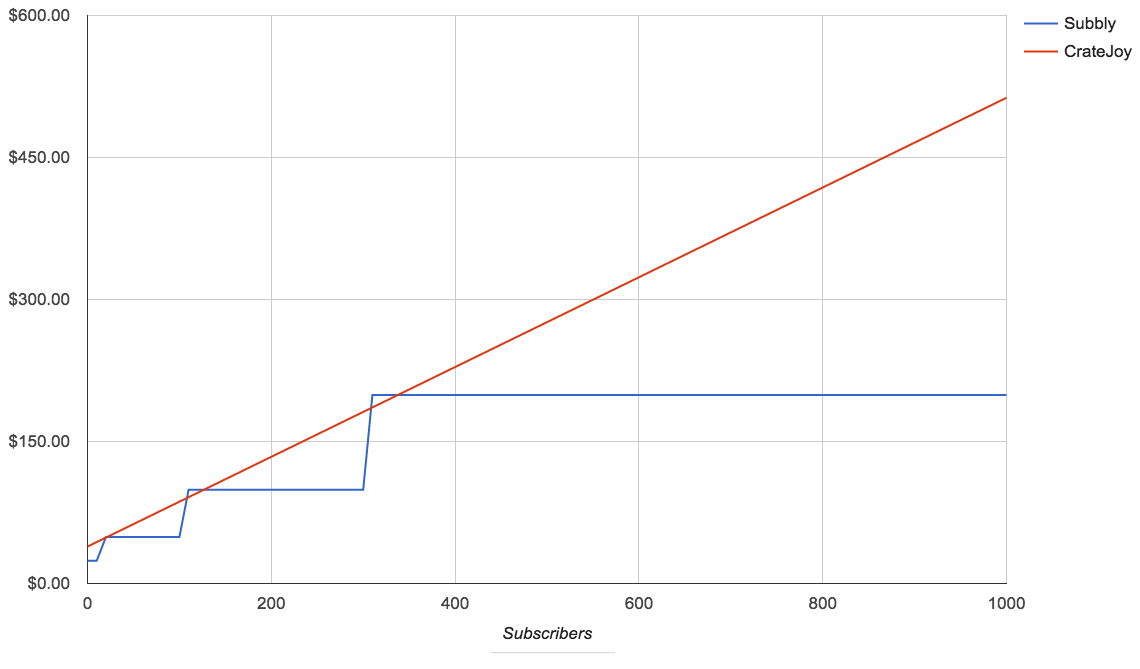 I didn't end up switching yet, as it seemed I would end up writing some glue code to keep the current non-Stripe subscriptions going. There would likely be other migrations to do, such as rewriting templates and importing everything over.

Perhaps a bit of sunk cost fallacy and NIH going on as well.

I'll be the first to admit that learning Python on top of GAE just for Candy Japan would have been total overkill. I just happened to be familiar with the stack from past projects, so it was easy to keep using it.

As you can see it's not even really optimized. A lot of the bandwidth is from accidentally including full images in RSS feed as data URIs, all served each time the RSS feed was refreshed. Oops.

The nice thing about GAE was that I've had basically no downtime and haven't had to configure anything or worry if the site would hold up to slashdotting, as it autoscales.

Perhaps not strictly a Candy Japan cost, but please don't make me go back and redo my chart.

Irccloud lets me hang out on the #startups channel on IRC FreeNode without losing chat history and ask for feedback on these posts.

Mailchimp is a tool for composing and sending email newsletters.

They have a free tier and I had planned to stay under it. Then one month I went over the limit and discovered that once you go paid, you can't go back.

The chimp outwitted me. 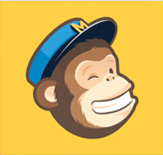 You can start doing customer support just fine through plain email, but after you get a bit more volume and want to hire someone to help, you need to be able to share the task somehow. Zendesk has the additional benefit that Facebook page messages and tweets can all go to the same place.

All of these costs. I'm going to make them disappear.

Yes, you, Patio11, sitting there in your mansion in Tokyo, reading my blog and at this point thinking how insignificantly low all of these software costs are. All of the above put together is barely visible when you look at the big picture. 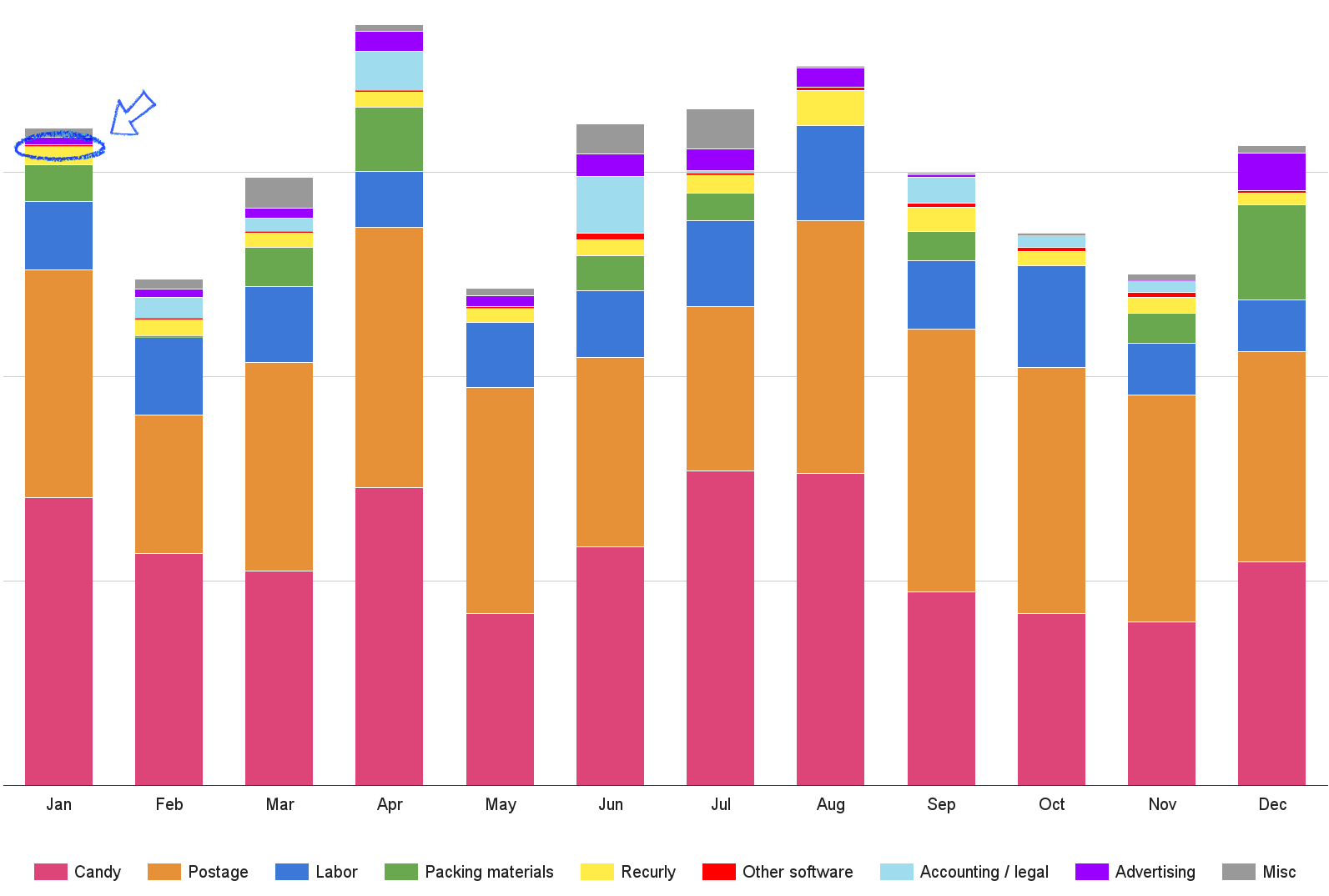 The chart above includes not only software expenses, but everything else as well. See that little arrow pointing at the red slice in the upper right? That's all of the software costs from above.

Everything else is non-software.

Well, except Recurly, but as payment middleware you might see that more as a transaction fee.

Software and servers are really cheap now. Actually the clip art of that crayon arrow used in the chart cost more than the monthly bill from App Engine.

If you are writing your own SaaS and thinking what to charge, your customers may not be as price sensitive as you might assume.

It doesn't take a very large increase in sales or a big savings in time to justify spending some more.

Thank you for reading

If you would like me to send you some candy, you can subscribe to Candy Japan here.