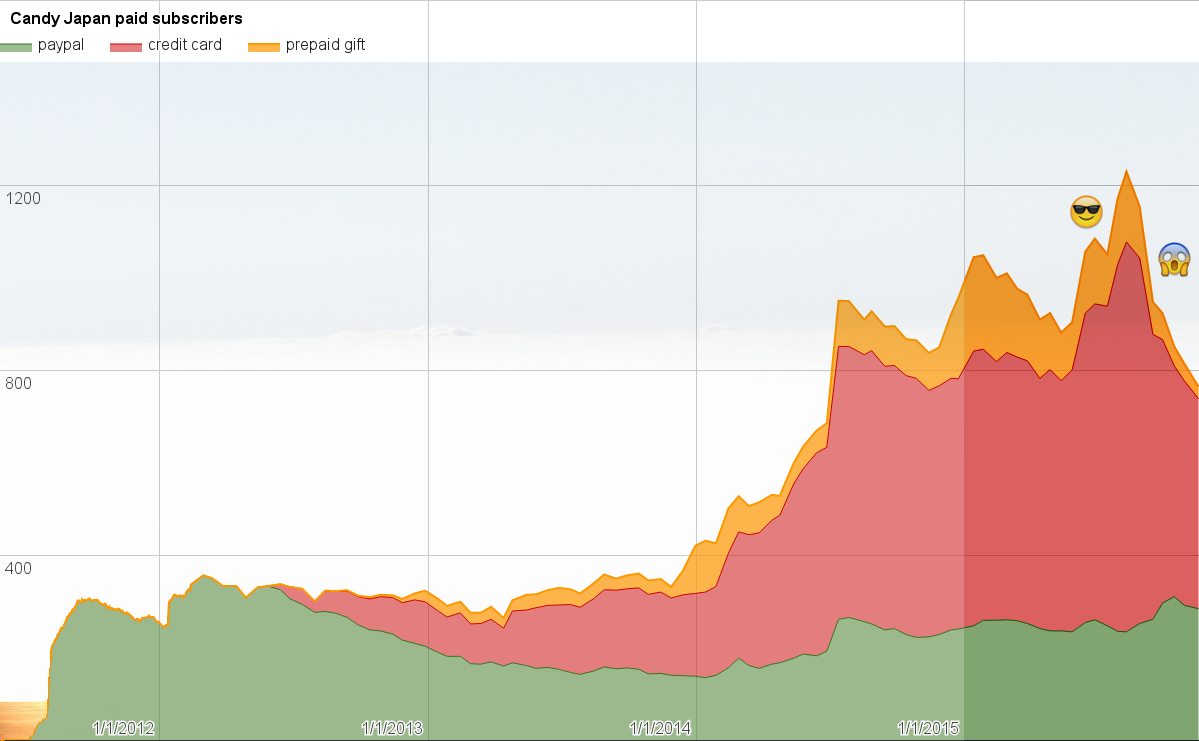 How it started
Candy Japan mails subscribers around the world candy twice a month.
In 2011 I moved to Japan and needed some income, so I decided to see if there might be something I could sell online. I picked sweets, as they have a nice balance between fun to receive and easy to send. I wanted to try having recurring subscribers instead of doing one-off sales.
The service grew rapidly to 300 customers in 2011, then had a long stable until 2013. In 2014 there was massive growth.
2015
One year ago I set myself the goal of reaching 1500 subscribers. In reality this year turned out to be quite a roller coaster.
I thought we were doing great, even crossing 1200 subs at one point. But that turned out to be a mirage. All lies, just a dream. Fake. They were actually criminals engaging in testing stolen credit cards.
Reality check
Purging fakes took us under the magic one thousand subscribers again. An important number not just psychologically, but because that's where postal discounts start.
I played cat-and-mouse with the fraudsters for a bit, adding various checks such as e-mail confirmation, IP bans etc. but it only took hours for the criminals to adapt to these. Some of the fraud was pretty blatant. 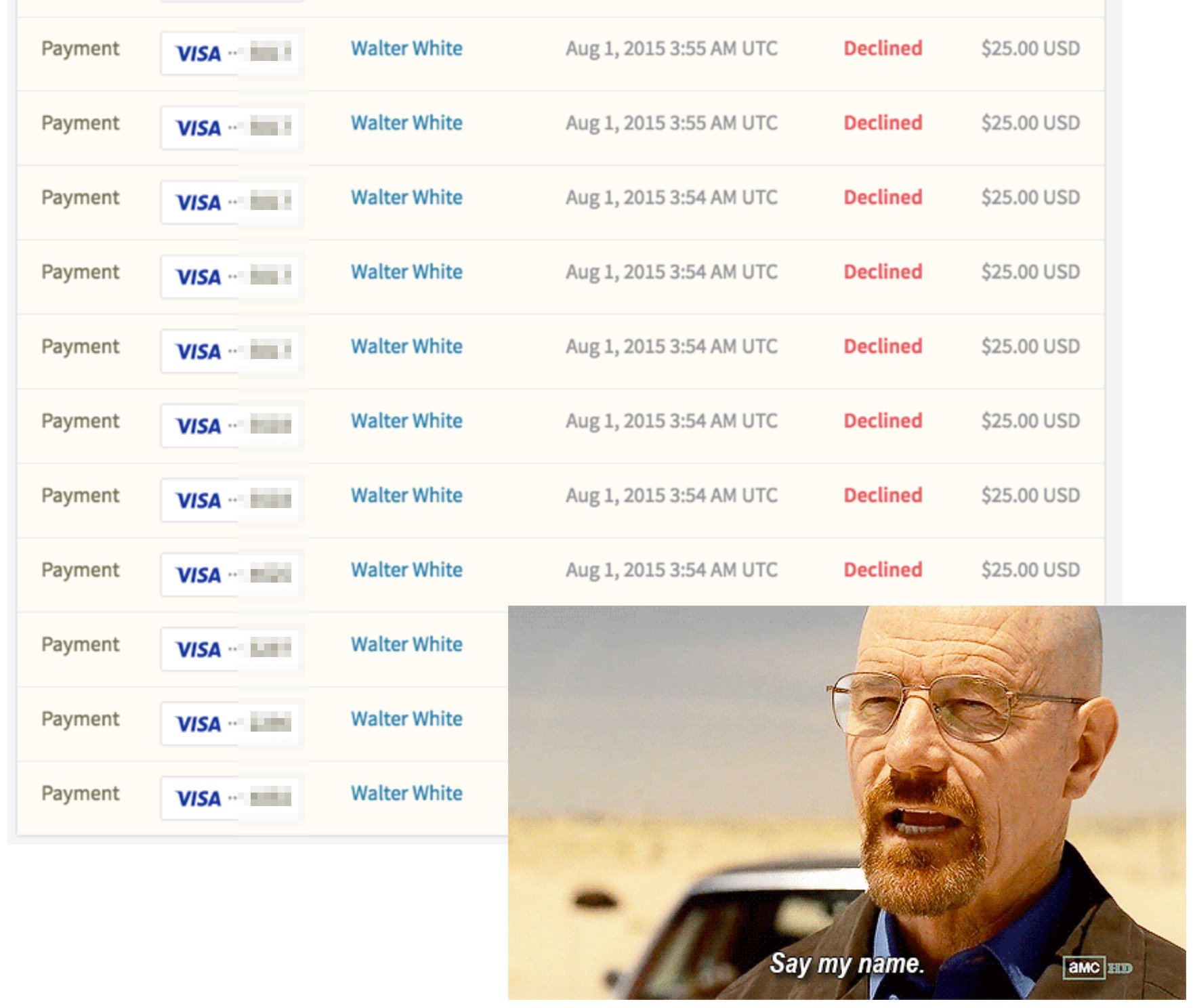 Eventually I just ragequit and switched off credit cards, going back to PayPal-only.
Besides costing thousands of dollars in various fees, it had other negative consequences as well.
I had spent time coming up with a new sign-up flow which was looking very promising, but had to scrap it when switching back to PayPal-only. Similarly I had to stop an A/B test midway, as the fraud was skewing the results too much.
Buying gift cards I had only implemented through credit cards, so switching to PayPal meant that I could no longer sell those. This led to more lost sales. Having PayPal only seems to lower conversions, so I am losing sales there too.
Growth backtracked. We are now instead back to 750 subs and the trend still hasn't reversed. Very far from the goal of 1500 I had set.
Tax issues
I've lived in Japan long enough now that it seemed I might need to switch to paying taxes here instead of to my native Finland. It took almost a year to get a decision on this, while in the meantime I continued to pay to both.
I thought taxes in Japan might end up being much cheaper, however turns out Japan just has many different kinds of taxes which are not paid at once, so there is much more to pay than just the low initial bill.
After Finland finally agreed with the tax switch I received a big refund for amounts I had unnecessarily paid there. Celebration was in order, so I promptly spent it reserving flights & AirBnB for a 2016 summer in Europe (if you are in Paris / Amsterdam and want to meet up, let me know).
Wrote a book on how to start a subscription box
The third major undertaking was to expand the type of writing I do on this blog into a whole ebook. It's called "How to Start and Grow Your Subscription Box". The writing process was much tougher than I had anticipated.
I hoped to complete it in a month, but in the end it took 4 months, with the mid part feeling like "this is hopeless and will never end". Besides just writing it out, there was more research and reorganizing than I had anticipated. 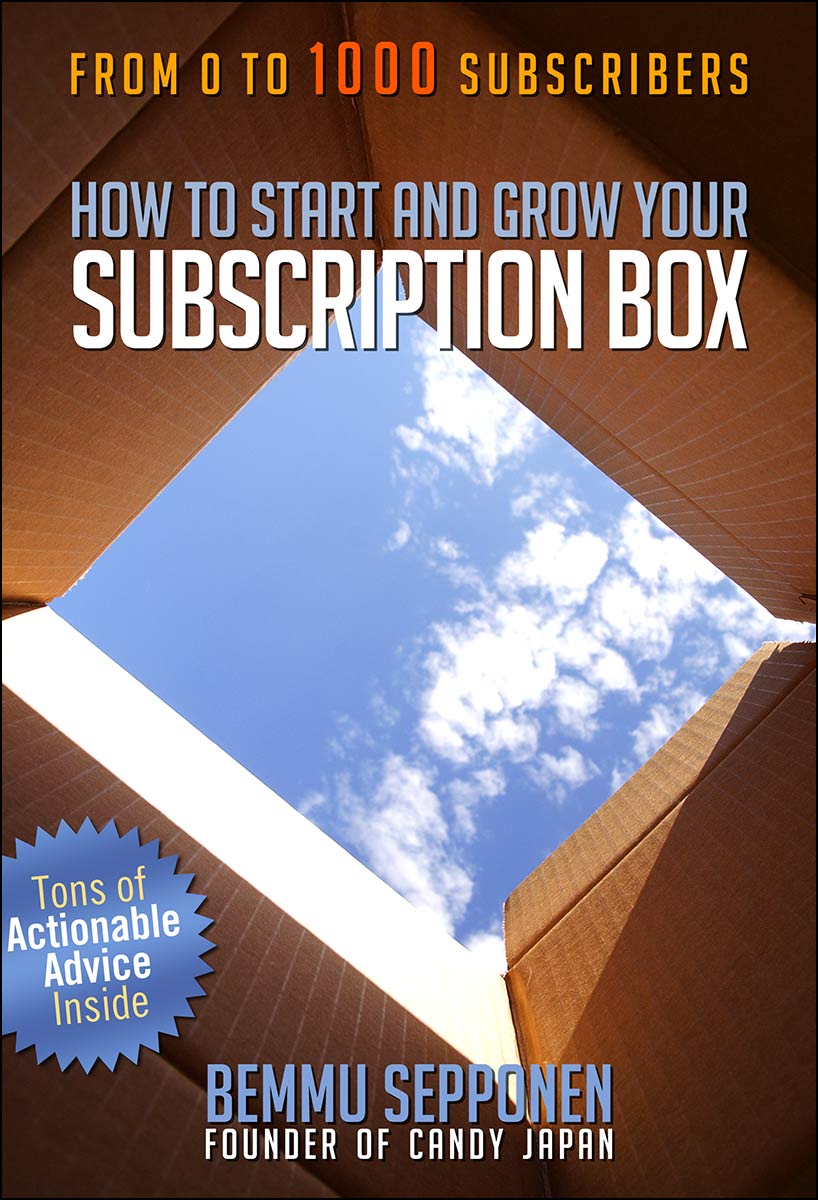 CC fraud, tax issues and writing the book were the main activities this year. If you would like to read the laundry list of minor things I spent time on, read on to part 2.
If you liked this post and are considering starting your own box, please do check out the book. If you'd just like to get some candy, you can subscribe to Candy Japan here.