Do articles about Japan do better at night?

Many factors affect the success of stories on Hacker News. The basic formula is based on the number of upvotes, adjusted with a time decay so that popular stories eventually leave the frontpage to make space for new ones. Stories may get penalties based on title or overheated commenting activity. Flagging by users and voting ring detection play a role as well.

Although most posts go nowhere, there is some correllation between posting time and chances of success. Below you can see a chart compiled by Max Woolf showing the chances of a post getting at least 10 upvotes, for each weekday and hour. I often write stories related to Japan, so I wanted to continue the investigation to see if there might be a country-specific element to the optimal posting time. Peak Hacker News usage times should differ for each country because of time zones. I'll start with UK as an example, you'll see why later on. 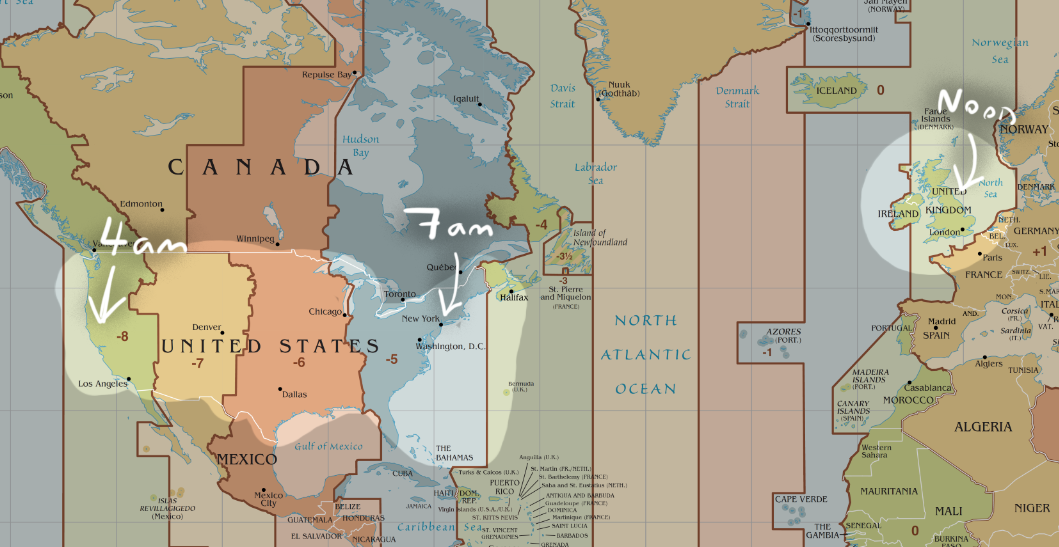 Assuming that people in the UK are more likely to upvote posts related to the area, posting when the highest number of people from the UK are looking at the new page seems like the way to go.

The most accurate way to discover peak usage would be to look at IP addresses from Hacker News access logs, then map those to countries. Sadly I don't have access to those logs.

Country-related postings as a proxy

Assuming people are more likely to post local stories, looking at country-related posts should be a pretty good proxy for usage. What I mean is that if there are a lot of posts about "United Kingdom", "Britain", "British", "UK" or "England" in the titles, then maybe it's peak time over there.

Below is a plot of how many stories per hour were posted with those phrases in them. The time zone in this and all other charts is UTC, which in this case conveniently happens to be the UK time zone. 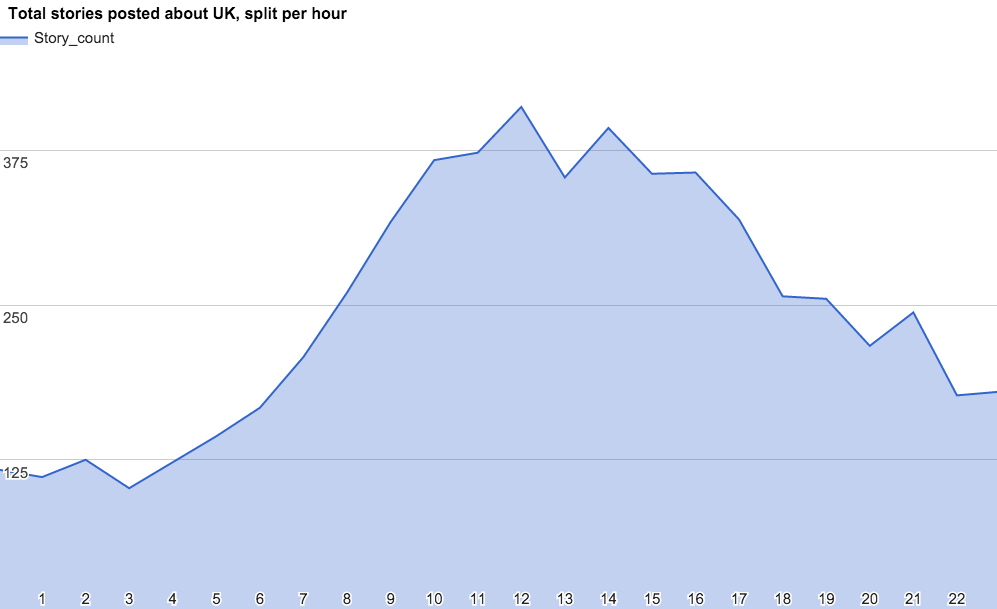 This rather satisfying curve was based on about 6000 story submissions. Posting to Hacker News seems to happen mostly during working hours. You can see people gradually waking up starting from 7am, with peak usage happening at noon. There is a dip at 1pm, maybe for elevenses?

Next comes the big question. Are UK-related stories more likely to succeed during peak hours? "Success" here is defined the same way as Max did with his chart, as a story that has 10+ points. For each hour I checked the percentage of stories that succeeded. You can see them below in red, overlaid on the previous graph so you can see the relation. 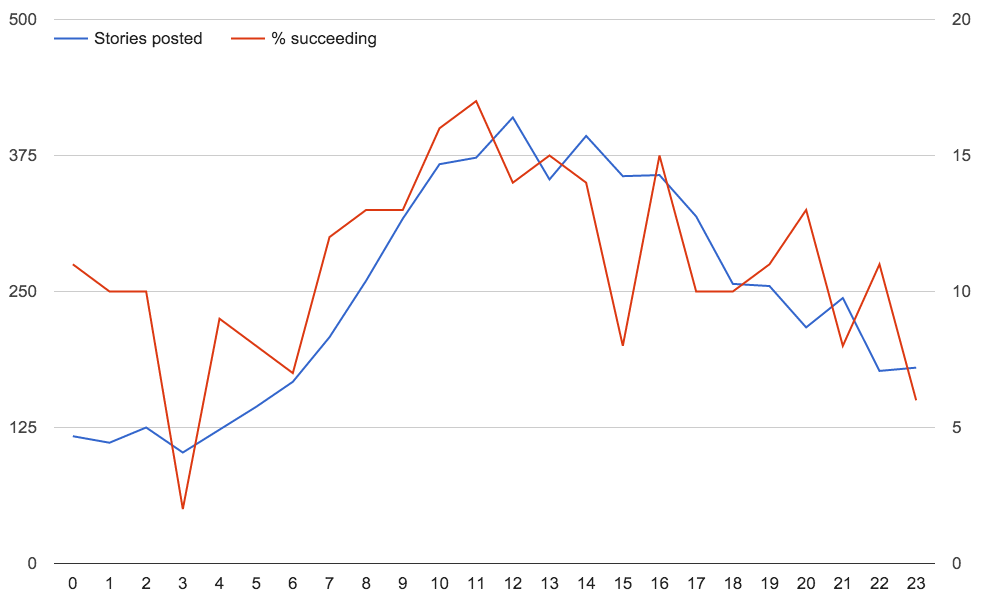 While the graph has some strange quirks to it, I would still call it a rather nice fit.

Since I write many stories about Candy Japan, the big question for me is whether an optimal time exists for making such posts. The answer is... rather unsatisfying. I wanted to show the nicer curves first.

Below you can see the posting activity for anything with "Japan" in the title. Again in UTC time zone. 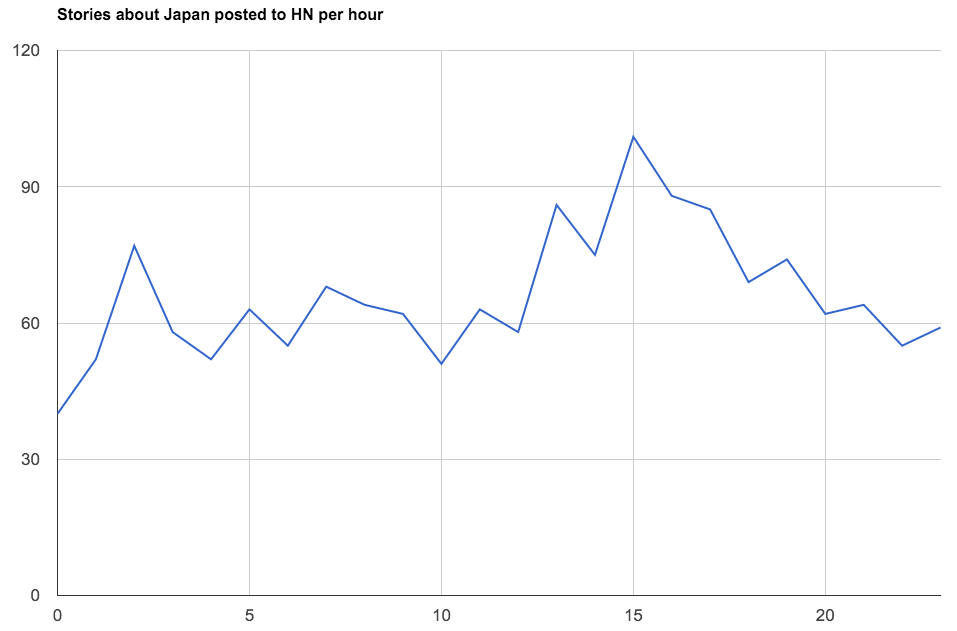 So far so good. There is a clear peak at 3pm UTC, which in Japan is midnight. The 1581 posts this chart is based on is enough data to make a plot of posting activity, but it turned out not to be enough to make a nice plot of the success ratio. There are only about 15 stories per hour that have at least 10 points, making the chart too noisy to make much sense of: 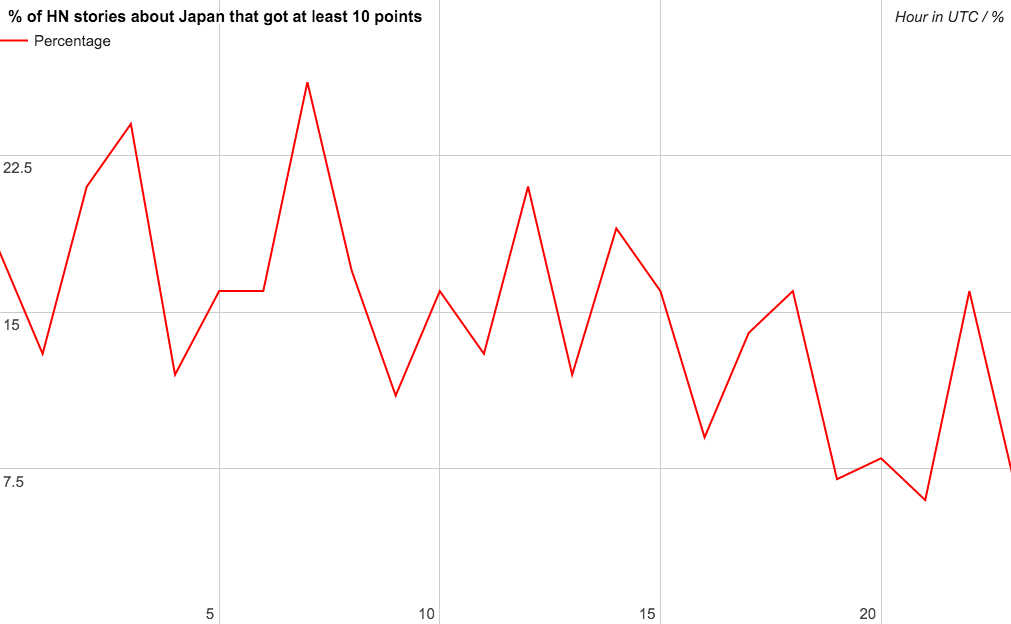 It could be that the timezone doesn't really matter, because almost no-one living in Japan uses Hacker News and all related stories are actually posted from abroad. Another reason could be that Japan is just so interesting even to people not living there that there isn't much regional effect.

The best time to post about Japan remains a mystery. It's 7am UTC (4pm) if you believe the noisy graph, or 3pm UTC (midnight) if you would rather like to assume that the peak time is also the best time for Japan.

Thanks to Artem Olegovich for the illustration work and to Qaisar Tariq for GQL help.

Let me know in HN comments if you would like me to make a chart for your country.